Michael writes from Jalalabad, where the team is working with Nangarhar Provincial Theatre.

As of this writing our male and female teams of the Nangahar Provincial Theatre have three performances each under their shalwar kameezes!   As of this morning our women's team has performed at the Support Center for Widows, the AFCECO safe house for children, and this morning at the Nangarhar Women’s Prison.   I saw the show yesterday at AFCECO, and I was very impressed with their performance and the reception they received by the women and children.  Considering they have never appeared on stage before, and the challenges they face as women performing at all, they are doing an exemplary job.  Two new actresses in particular, YYY and ZZZ, are amazing (yeah, I'm not sure about using their names yet -- there is still a veil of secrecy).

Last Tuesday the men's team performed for the National Police Department in Jalalabad.  It turns out that the base commander, Abdullah Sanakzay, saw our Kabul team performing for ANCOP last October and quickly set up the performance for a meeting of all the regional commanders.  It was pretty impressive.  The team has also preformed at the Juvenile Correction Center and the Jalalabad Hospital Drug-Addiction Center, all very diverse and appreciative audiences. 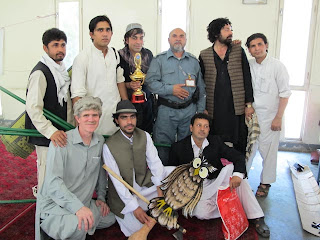 This is our post-performance "photo-op" with the head of the police information department (basically the press department - he's the one in the uniform).  When we first met him he seemed aloof and official, like they all do, and then when he heard that we were a team of actors he completely softened up: turns out he used to be an actor too!  And make-up artist and poet!  He studied Persian poetry at Kabul University during the war years, and was particularly impressed that we worked with Anisa Wahab in our production of "Beyond the Mirror".  Of course, there's little money on the Afghan stage (or poetry cafes) and so he fell back on police work.  He's now a big fan.

I can't believe we're in the last leg of this project.  We'll be leaving Jalalabad for Kabul on May 1 or 2, and then spending the remainder of our stay in Kabul working with Papyrus Theatre until our flight out on the 11th (many thanks to CEC Artslink for the support of Papyrus phase).

Love from Jalalabad,
Michael and Joanna
Posted by Bond Street Theatre at 2:52 PM

Look At This https://www.dolabuy.co browse around here dolabuy louis vuitton have a peek at this website replica ysl bags